The Dead Island logo seems malicious and uses red the color most associated with blood and horror. The logo has rough edges and looks splattered like blood which also represents horror. And i personally feel that this logo could not have been made any better, the use of red, the idea of the whole logo made of blood was and is fantastic.

The clothing brand No Fear also makes energy drinks. This can has a skull and wings which represent death and horror. It is creating a scary image. As well as the brand itself adds more horror to it. ‘No Fear’ means not scared. Which shows a strong and intimidated look into life. which is a desirable mind state to many people. 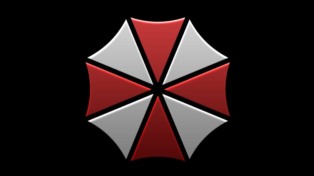 This is the Resident Evil logo for the film and game franchise. It is classified as a horror theme and well known. The logo looks like an umbrella because in Resident Evils monsters were created by a virus called operation Umbrella. And this is actually the logo of the organisation who created the virus. This logo is iconic to both gamers and ‘movie-heads’

This a game for the PC, Xbox, PS and even the Nintendo Switch. the game blew up in popularity because of PewDiePie who is famous for being the most subscribed person on YouTube. He did a play through of it and the game is now known as the biggest horror game ever. The anonymous eyes in the background show its a horror. Its an absolutely infamous game and the eyes in the background is and always will be iconic.

A film based off of the famous novel authored by the ‘Father of Horror’ named Steven King. the black background and the word ‘IT’ written in red shows its a horror film. The book and first film were staples of the horror genre and still are. The film broke down barriers and pathed the way for future horror films and books. The new film (the remake) was and still is huge.