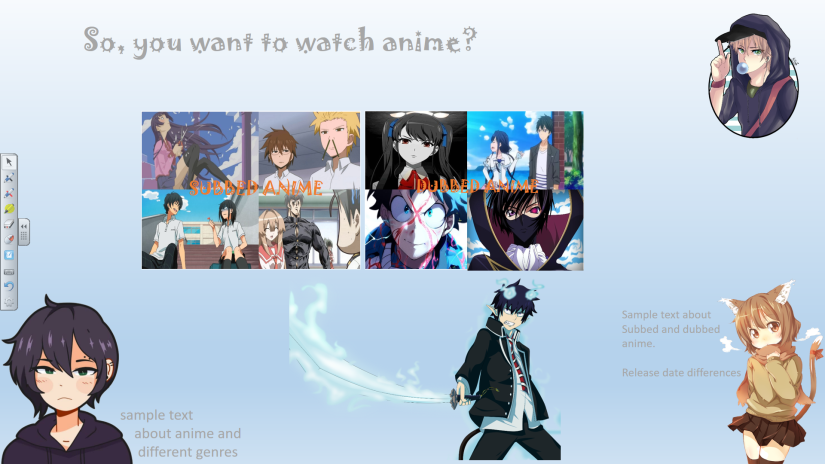 The research I did, helped me with the layout and design. I noticed that in a lot of sites they have background images and some even have a specific mascot. Research is the base foundation of a site, research shows you how to manage and how create a site.

I used my research to create the layout of the site. As well as the mascots, I noticed that the websites I seen didn’t have a lot of blank space. Everything was covered. So I tried to do the same, without the page seem cluttered and messy.

The planning process really helped, if I didn’t do the planning I would have gone in blind and wouldn’t really know how a website should look or how its managed. i used some features and I ditched some as well. I kept the 2 boxes with 4 images in them. But I changed everything else in the end version. The colors, the images, and the layout as well. I found the placement of images difficult, what images would fit the best and where I should place them was a case of trial and error.

One of the sites I had researched was called ‘RyuAnime’. The site has been shut down and remade countless times, as it would give anime out to the public for free. It was taken down by anime companies such as ‘Funimation’ due to copyright. Its original layout was very unique and I loves how it was set out. It was a black background and has an anime girl in the corner of the screen that would wave at you when you opened the site. Which is why on the far top right I have an anime character waving at you. The original design was lost as it was taken down so many times. But the one feature for the site they have kept since the start and even now, 10 or 15 new sites later was a grid of anime.

I made my own adaptation of the grid with my site, I made two grids next each other that had dubbed anime (audio in English) and subbed anime (English subtitles). Now, for the sake of research I should link the site, but the site destroyed my PC, will viruses and all kinds of malware. And on top of that the chances of the new site lasting more than a week without getting taken down once more is 99.9% but I have put the original name of the site. There is another site that will help me better explain what Ryuanime was like and I still use this site today as it is way safer than RyuAnime and is safer towards copyright its called https://www.cartooncrazy.tv/

Just like RyuAnime, this site has anime characters in the background, and really popular ones at that. The one to the left is named Hitagi Senjougahara. She is a fan favorite from the Bakemonogatari series. This series is a well known and well loves series, its a great way to get people to use this site. The one to the right is Named Silica and she is from Sword Art Online. She is once again a well known and well loved character from one the most popular anime of recent years.

I used a popular character in my site, He is the boy in the middle with the blue flamed sword, his name is Rin Okumura. He is from the Blue Exorcist. I, just like my researched sites, used him as he is an extremely popular character from a very well loves series. Which will make fans of this series use my site.